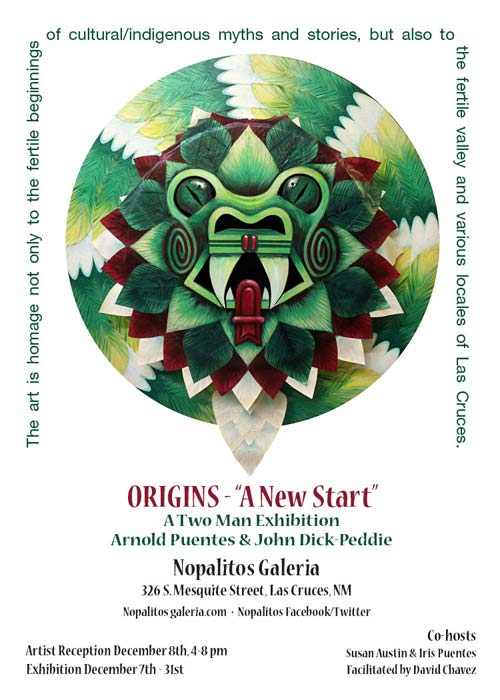 “The art is homage not only to the fertile valleys and various locales of Dona Ana County and Las Cruces, but also to the fertile beginnings of indigenous/cultural myths, stories, and images.”

Arnold Puentes was born in Silver City, New Mexico and spent his earliest childhood years in the nearby mining town of Santa Rita. He attended schools in Santa Ana, California and Las Cruces, New Mexico. He was first exposed to art at an early age by his father, and he credits his first art teacher and mentor in middle school for developing his passion for creating art. Arnold began his formal art training in high school. Awarded a Kiwanis scholarship to New Mexico State University, he undertook a painting major under the instruction of painter and muralist Ken Barrick, sculptor Ed Vega, and designer/painter Dr. Trini Lopez. In 1980 he traveled to Mexico City with the aid of a research grant to study methods, materials, and techniques of mural painting. He graduated from NMSU with a BFA in Painting in May 1981 and relocated to Albuquerque, where he has been active in the local Hispanic art community and has since painted and produced several community/civic murals. 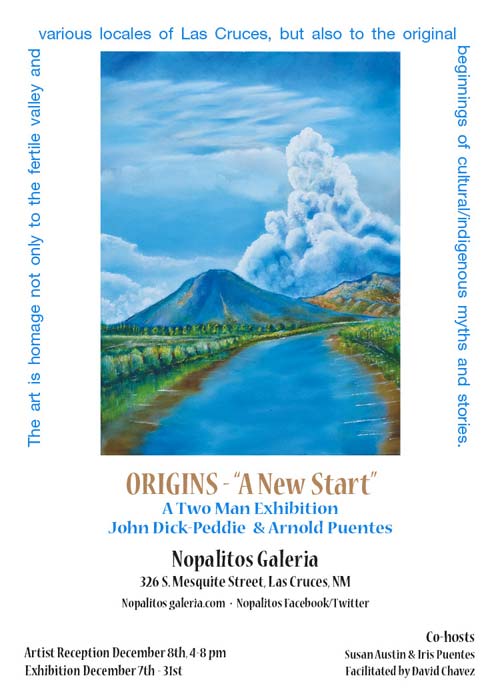 “The art is homage not only to the fertile valleys and various locales of Dona Ana County and Las Cruces, but also to the fertile beginnings of indigenous/cultural myths, stories, and images.”

John was raised in Las Cruces and became friends with Arnold early in grade school. Their friendship continued and grew through their high school years at Mayfield high school and college years at NMSU. As is life, after receiving their degrees, their paths went different directions both professionally and geographically. Their friendship however remained intact to date. John was diagnosed with Parkinson’s disease in 2012. He has since incorporated the challenges he feels from the disease in some of his paintings in an attempt to allow the viewer A deeper understanding as to how the disease affects mind body and spirit. 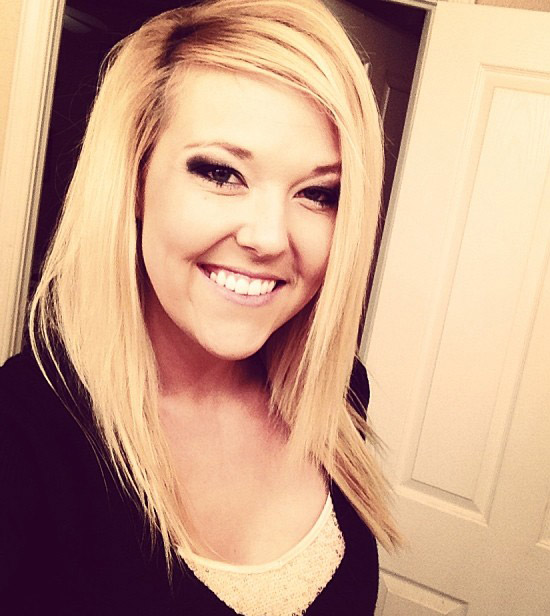 Stephanie Lee Forrest, extraordinaire, was born in Albuquerque, New Mexico in 1985. This innovative Artist currently lives and works in Las Cruces, NM. Ms. Forrest has a Bachelor’s degree of Fine Arts from New Mexico State University with an emphasis in Graphic Design. Ms. Forrest’s art work is represented in drawing, painting, photography and digital works. Her work is primarily in charcoal and pastels. Ms. Forrest’s multimedia exhibition entitled “Objections to Realism” pushes the limits of reality focusing on old and new works the artist has created over the years.


Her inspiration comes from powerful female artists such as Ghada Amer and Georgia O’Keeffe. Her work ranges from abstract pieces to portraits; all are very vivid in color. As an emerging artist, Stephanie likes to surround herself with beauty as a source of inspiration.


“As an artist, my ambition is to generate a theme using images and text to show my personal interests. The images in this show are some of my most secret thoughts and feelings. My hope is that the pieces in “Objections to Realism” will inspire others to push the limits of reality and find their own voice in life and art. What I love most about creating art is getting excited about an idea, translating practice into imagery, when the work comes together as a whole and represents what I am attempting to say, and especially if it makes a collective impression on the observer”.

ARTISTS for “MI CULTURA” (My Culture) 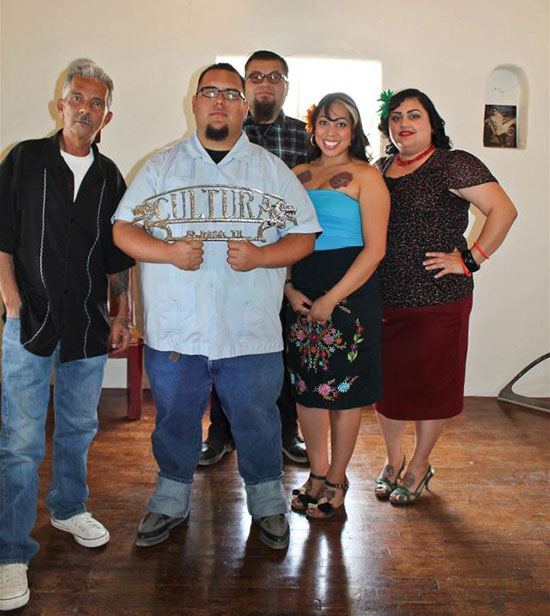 Born in Las Cruces, and raised in La Union, NM, Adam ”Avenue” Tellez was first introduced to the custom car culture through a lifelong friend who acquired a Cadillac lowrider soon after they had finished high school. “I was first infatuated by the cars, lowriders and traditional classics, to radical hot rods and motorcycles, I came for the cars, but soon discovered a whole other world.” Influenced by the vibrant street cultures that accompany the custom car movements, Adam has made a respectable name for himself by portraying these lifestyles through photography. His self-proclaimed “custom lifestyle photography” not only captures beautiful imagery of custom built vehicles, but also the people behind them. He portrays the attitude and spirit of the car culture that many may overlook. “The people within these lifestyles all have stories of their own, I have met all types of owners and enthusiasts, who have further inspired me to represent them through my work.” In a world where most people would embrace the latest technology or trend, Adam has a love for all things vintage. Primarily featured in his photography are 50’s era vehicles, as well as Pin-Up style models. “It is my tribute to those who came before me and created the lifestyle that I breathe for.” One thing is for sure, this all makes for some very timeless photography.

Didi Vasquez is an artist, model, and military wife, born and raised in the Ysleta area of El Paso, TX. Her main inspiration for her style of artwork comes from two influences, being raised by her Mexican grandparents, and her father’s love of Rock & Roll music and 50’s era science fiction flicks. These two elements come through in Didi’s work very clearly. Her love and fascination with Dia de Los Muertos art and imagery also has a very prominent influence on her work. Didi creates one of a kind sculpture pieces with individual personalities all their own. Working out of her home studio space, always accompanied by her rescue dogs Johnny Cash and June, she creates unique statuesque sculpture pieces primarily with polymer clay, and quite often other mediums as well.

El Paso Native artist Jesus De La Cruz has been drawing and painting since the early age of 8 years old. Taught and influenced directly by his grandfather of the same name, Jesus, otherwise known as ‘Mr. Z”, combines elements of the Mexican American culture he was born into, as well as the influences of his surroundings, and creates works of art and characters all his own. Jesus employs quite a list of mediums to translate the creations in his mind into visual realities, such as spray paints, acrylics, paper animation, inks, oils, and pastels. Since 2008, Mr. Z has taken part in many art shows and exhibits, “Planet Z” consists of original characters, graphic novels, paintings, and even metal works. He places no limit on what can help him translate his imagination into art.

Born and raised in Southern California, Yvette Moran was brought up by “the most wonderful, loving grandparents anyone could ever be blessed with”, She relocated to El Paso, TX, with her husband to be a dedicated homemaker and mother to her daughter and two step sons. Yvette had always loved and admired art, and it had always been in her, filling many notebooks with doodles and creations throughout adulthood. It wasn’t until she became a homemaker that her creativity really took off. Her husband recognized that great potential in her talent and suggested that she begin to share it with the world. It was at this point she began to paint and bring her doodles and creations to life. Yvette says she can lose herself in her creative process for hours at a time, and her art room is her place of peace. She says with the continued support of her loving husband, her family and friends, she will create art for years to come.

Seemingly the most traditional amongst this group of artists, Larry Primera is a formally trained artist, a UTEP graduate, with a B/A in Art Education, and has an entire career as an art teacher under his belt. Larry grew up in the lower valley area of El Paso, TX, he is influenced by abstract art and artists like Frida Kahlo, Goya, and fellow El Paso artist Luis Jimenez. As a young child, Larry always found himself being creative, usually drawing, and eventually making the jump to paint canvases. Teaching art to others became Larry’s passion, but he wanted to teach differently from the individuals he experienced in his youth. Resulting in the development of a method of painting that he wanted to benefit underprivileged kids, who commonly could not afford art materials, Larry came up with Painting without Paint, a method using miscellaneous materials like kool-aid, syrup, chocolate, etc. to create works of art without the use of actual paints. His life’s passions are art, and bringing classic cars back to life, he owns two classic vehicles himself. Art and cars will be his legacy to the world.